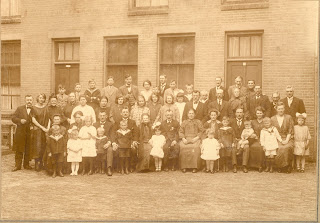 I’m out of whack.  This morning when I
started to make my usual cup of tea I found myself making coffee instead – the
whole coffee shebang, complete with frothy milk.  I usually drink coffee
later in the day and start off my waking hours with Earl Grey tea.
Before I realised I was making coffee instead
of tea, I had been lost in my thoughts, which is easy to do on a Sunday morning
early before any one else is up, including my husband who likes to leave his
tea until it gets cold.  Not for me, cold tea, I much prefer it
hot.
Life is feeling too hot at the moment and my
head is full.  I wondered as I fiddled with water from the kettle and milk
from the fridge, why I did not know the reason behind one of my daughters being
up early this morning well before me.  Unheard of on a Sunday
morning.  Perhaps she had told me.  And that’s the thing, I can’t
remember.
I can’t remember either what was the question
that Helen Garner asked at a conference yesterday, not a writing conference,
mind you, but the famous Freud conference, one in which psychoanalytic ideas
get thrown around.
I have gone every year for the last several
years to the Freud conference and each time it is a thrilling event, for me at
least, not only the topics discussed, but the audience interaction.  The
audience interaction is the most amazing of all.  It is one of those
conferences where half at least of the audience of around two hundred people
know one another, a small conference by some people’s standards but by the
standards of the psychoanalytic community in Melbourne it is huge.
I expect Helen Garner was there for ideas that
might filter into her book on the Farquharson case.  The Farquharson
affair is the sad story of a man who killed his three sons on Fathers day
ostensibly as an act of revenge against his estranged wife. He pleaded
innocent, saying that he had lost control of his car through a coughing fit as
he approached the water into which he drove with his sons.  He managed to
free himself, but not the sons.  The jury would not buy his defense.
Farquharson, as I understand it, after an unsuccessful appeal, is now in
prison.
I write about it all here dispassionately, but
it has rattled me, all this talk of homicide and madness.  I could write
about it with my academic hat on, but my point here is more related to the
behind the scenes experience of being at such a conference, the shiver of
anxiety I felt in a room filled with people many of whom I know, some of whom
I’m fond of, some with whom I have deeply personal connections, mostly via my
work, and others with whom I have no connection at all, and the odd person – I
stress odd – towards whom I feel downright hostile.
I’m writing this in short hand and leave you
to read between the lines.  It is one of those situations where I cannot
be more specific, though I can be specific about this amazing section of the
conference where the writer, lawyer and psychoanalytically trained professor, Elyn Saks, who
also happens to be schizophrenic, spoke about her life and her wonderful book, The Centre Cannot Hold – also the title of the
conference.
The topic was unsettling but more so the fact
that it was delivered via satellite link-up.  Elyn Saks sat facing the
screen and what to her must have looked like an audience of bobbing heads and
clapping hands.  She sat at a dark desk which was centred in what looked
like a conference room or large office.  We, the audience, could see only her and the chair in which she sat, the table/desk in front of her, all in dark office colours, against a huge white board on a white wall.
It must have been evening time for Elyn Saks
at eleven am Melbourne time but she did not seem so much tired as surreal.  That
was until she spoke, at which time she came alive, especially during question
time.
Hers was a plea to recognise that people with
schizophrenia and other sharply defined mental illness can and do lead
successful lives.  One difficulty among many, seems to be that people with
severe mental illness are often told to lower their expectations: Go get a job
in Safeway or something, once you get over the hurdle of a psychotic episode.  Don’t try to do too much.
When I asked a
question of Elyn Saks during discussion time, I felt this
weird collision of worlds.  I held the microphone in my hands and faced
the screen where she sat.  It was like one gigantic skype session,
only with a audience of two hundred people and Elyn Saks alone at the other
end.
My question, more a comment dealt with the issue of separation, which she describes in her book.  How unbearable she
had found it when her first therapist in London left her, because she and her
husband were moving elsewhere as I recall.  They had to pry Elyn
loose.  I know this feeling well and she spoke to it well.

A family gathering from my mother’s day, when she was one of the little girls in the front row.  For some weird and surreal reason this photo reminds me of the Freud conference, another gathering of sorts, where the ghosts from the past settle on our shoulders and our futures are as yet unimaginable.
And here’s a quote from Samuel Beckett, to help you on your way:
‘You must go
on.

You must go on.

You must go on.

I’ll go on.’
Samuel Beckett, The Unnameable
Before I stop I must acknowledge my good blog friend, Kath Lockett from the Blurb from the burbs blog, and Goofing off in Geneva, who graced me with a Liebster award.  With many thanks, Kath.