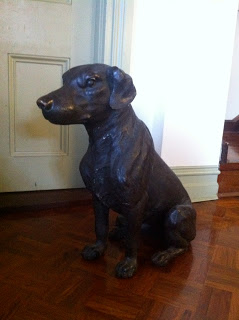 A cousin of mine has died.  I did not know him well.  The last time I saw him we were
children.  My mother stays in touch
with his parents but we cousins have lost all contact.  He was living in Queensland but I know
nothing else at this stage other than that he was dead for four days before
they found him and the police said there were no suspicious circumstances, or
words to that effect.  He died of
natural cases.

To me there is something
horrendous about the idea of dying alone, not so much the fact of dying itself
but of being left unburied or non-cremated, left unattended after death.   To be found eventually in a state
of decay.
I once wrote a short story about
this, in the early days when I first began to tackle the short story form and
made the mistake of giving it to my husband to read.  He was furious with me after he had
read the story because to him it lacked any redeeming features and disturbed him too much.
It was a good lesson for me in that
I stopped asking my husband to read my writing in early drafts.  People talk about the need to have your
‘best’ reader for early drafts of your writing, someone whom you can trust to
be honest about the writing, someone able to make constructive suggestions
about how to improve it, not someone who will undermine your efforts, or, almost
worse still, someone who will praise your writing to the heavens without
observing how and whether the piece is working.
I have a couple of friends to whom
I send early drafts of my writing, one to whom I send fiction, another to whom
I send my more non-fictional efforts.
Both approach the task in different ways.
First up though, I call on my upon reader
self.  She is unreliable.  I
cannot trust her.  As much as I cannot trust our former dog – the one we call the bronze heeler.  He offers nothing other than an image of the real thing.

Doubtless, you’ve heard the
expression: ‘murder your darlings’?
It’s hard to murder your darlings without an accomplice, someone who
will tell you what darlings need to be killed off.  On my own I am not good at detecting such perils in my
writing.  My darlings seduce me
into thinking they should stay.  I should
spare them, if not for now, then for later.
I read recently that someone has decided to promote October
as the month in which you only buy what you need month.  For some reason this notion appeals to
me.  The idea is that every time
you go to make a purchase in October you ask yourself the question: Do I really
need this?  And if you do not, then you return the item to the shelves.
If I could apply the same principle
to my writing, I might never create the darlings I would later need to kill off.
On the other hand, for a writer
not to allow whatever emerges to creep onto the page might be problematic.  It’s better to have darlings to kill off than to have nothing at all.

And here again I think of my cousin, gone now.  I do not know whether he had a family of his own beyond his family of origin.  I only know that at the time of his death he was isolated and perhaps all too easily forgotten.

Among her seventy two reasons why writers
write, Margaret Atwood includes one about memorialising the past.  It’s our way of keeping on going after
we are gone, in the written word.
The trouble is so many of our words will get buried under the weight of
the world’s words.
Given that the Internet never forgets, these words could be a tribute to my unnamed cousin.  I hope someone somewhere cares enough to remember him better than I can here.