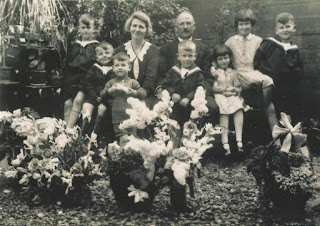 I don’t remember when the word
‘pride’ came into it.  I only know it started when I was young.  We were a proud family, or so we had been told, proud of our European heritage, proud of the fact that although we had no
money, we were well equipped with books and beautiful objects from Holland.
Pride began with my mother’s family.

The order, the neatness, the sense of it all.  She gave it away to follow my father for a better life in Australia.   But my mother kept hold of her pride.
We were different from the other mainly Australian families in our neighborhood.
They spent their weekends mowing their lawns and gossiping to one
another over back fences while we took family drives after Mass to Gembrook, the Maroondah
Dam, even as far as Eildon.
Most of all we were proud to be Catholics.  We came from the one
true faith and were destined for great things as long as we upheld the
traditions of our religion.
When Vatican Two came along and the nuns stopped wearing their habits, my mother was not surprised.  The nuns cast off their
wimples and shortened their skirts.  They adopted their baptismal names instead
of the ones they had chosen from among the saints, many of which were masculine names, when they took their vows.  The priest on Sunday
began to read the sermon in English instead of Latin and my older sister
introduced guitars and folk singing into the church choir.
This is how it should
be, my mother said.  In Holland, the
Catholic church is ahead of its time.
Holland is a country ahead of its time, but Australians lack culture.
This word ‘culture’ made little sense to me then.  I associated it with art, the paintings of naked men and women in my father’s books, which I pored through secretly, hot and tingly, stirred up with feelings I could not understand.
I associated the word culture with all things from
over the seas.  I associated it
with the workmen on building sites who wolf whistled as my sisters and I in our teens walked
past.
These workmen I knew were foreign.
They came mainly from the Mediterranean, from Greece and Italy, inferior
places I believed then, given the way the nuns spoke to the dark haired girls in my
class at school, but nevertheless these workmen came with an open appreciation of young
women, of beauty I imagined, and of this fearful thing called sex.
I found culture therefore to be an
embarrassing thing, something my mother esteemed and yet at the same time, even she
blushed when the workers wolf whistled.
Surely they did not whistle at
her.  Not then I thought, not after all those years, not after so
many babies when she had grown stout and stolid in her appearance.  When the only day she bothered to dress
up was on Sunday, though every week day she streaked red lipstick across her lips in
honour of my father’s return home from work in the evening.
My hearts not in the memories
today.  I’m tired,  jaded, not
enough sleep, too much wine with dinner and then later sitting up and waiting
till two in the morning for my daughter who left home at 10.30 pm for an evening on the town and then could
not find a cab to take her home given all the other young people in the city were looking for one, too.  The waiting up and worrying.  And my mind is addled with the effort.
While I waited I watched Marilyn Monroe in Gentlemen
Prefer Blondes and cringed all the way through.  These were the attitudes that prevailed when I was
young.  Women as blond bimbos after
rich men.  Granted it is a film
built on artifice and yet there is something in those attitudes that stick.
Yesterday, I read Anne Summers extraordinary piece about the way our female prime minister is portrayed in the media, the way she is vilified. All politicians are berated in this way, you might say, but our prime minister’s gender is used against her in extraordinary
and abusive ways that border on bullying.
She is childless by choice.  She is in a relationship with a hairdresser but is not married.  She is irreligious and does not fit the norm.  There are many who despise our prime minister for this, women as well as men, though mostly men it seems, particularly among the political class who find it hard to take orders from a woman.
It made me wonder how much
has changed.