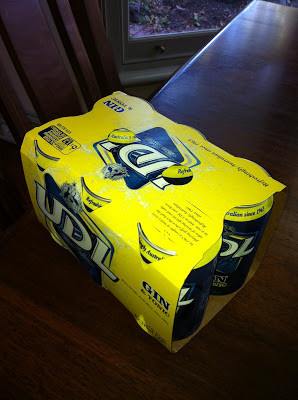 The young man at the counter seemed pleasant enough, his dark hair pulled back in a neat ponytail. It was hot and we were in a hurry to get home. Last stop the bottle shop to collect a couple of bottles of wine and a few cans of gin and tonic, the UDL brand, the stuff I enjoy on a hot day.

We left the store. I would have battled on but my daughter was mortified.
‘You re such an embarrassment screeching at him like that. It’s not his fault. He’s just doing his job.’

She’s right, of course. He was just doing his job, but a little too rigidly I fear.

Now I don’t know what to do with my rage. I can’t believe it. It’s worse than having the supermarket staff routinely inspect your bags, as if you were a thief.

‘I told you I didn’t want to go in,’ my daughter said to me. ‘You’re such an embarrassment.’

My husband was more empathic. And so we went back later after work to buy said wine and gin and tonic. I saw the young man filling shelves at the back of the shop. I smiled at him. He smiled back. I suspect he did not recognise me from earlier in the day until I said to him that I’d come back, but this time with my husband who was clearly not underage.

I smiled again, in what I thought was a friendly smile, a smile to make peace perhaps. He might have seen it as provocative.
‘I can’t allow you to buy anything within the same day,’ he said.
‘You’re kidding,’ I said.
‘That’s ridiculous,’ my husband said, and called for the manager.

For the next ten minutes we argued with the young man and his manager. The young man had formed the impression that because my daughter had carried those cans of gin and tonic to the counter they were for her. She had no proof of age – she had left her wallet at home – therefore, no purchase.

I can now tolerate the notion that he thought I was buying alcohol for my daughter who had no proof of age, but that he could not then sell me anything six hours later on the premise that I would go home and give it to my daughter continues to enrage me.

The manager in the end let us buy what we had come in for in the belief that we were genuine. But next time, he said, just make sure your daughter has her proof of age.

By the look of things there won’t be a next time, at least not for a while. My daughter is too mortified to be seen in this shop with or without me.

I have not been able to get this situation out of my head. Is it the business of being refused? Is it the stuff of being made to feel guilty or bad? Sure, I have taken it personally, which I need not have done, but it is the second guessing that goes on in such a young man’s mind that bugs me.

Is it the firmness of youth that he should take things so seriously? That he cannot discriminate. The rules are the rules.

The idea that he could not serve me in the twenty four hours following that purchase. How literal must he be?

I do not know how, but this situation has leached into my consciousness and gotten under my skin in a way that I might only understand in the fullness of time.

Is it because I was buying alcohol and alcohol is loaded for me? My ancestry?
Is it because as a child I once travelled on trains without a ticket and shoplifted lollies from the milk bar? Is the legacy of my childhood wrong-doing catching up with me? Or is it because I am sensitive to rules that have an arbitrary and ambiguous quality?