I don’t know whether it was my husband or one of my children who planted a Hardenbergia Violacea– otherwise known as a happy wanderer –along our side fence. 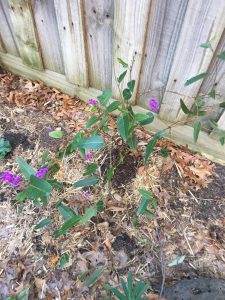 I noticed it just now, given its flowers break the monotony of a winter garden.

Purple flowers, the colour of mourning.

Someone once told me when I was little that yellow and purple went well together and when placed side by side, these colours represented grief.

The priests wore purple vestments with gold embossing at funerals and at Easter time before the Sunday when we were supposed to be mourning Christ’s death on the cross.

So, maybe it was a religious reference.

Purple is also the colour preference for a group of grandmothers in Australia who stand up on behalf of refugees, so maybe it’s also associated with age  and activism.

In any case, I’ve always connected the colour purple to sorrow.

Winter, and I hung out the sheets and pillow cases this morning early in the hope that what little sun we get today might dry them.

As I spread them over the line and contemplated which sheet and pillowcase should go where –all those small decisions a person makes when hanging out washing – I considered the number of years I have done so.

At least once a week and more often than not, on weekends.

It is my weekly chore and one I resent, but I imagine when I am no longer able to reach up to peg clothes to the line, I might miss the practice.

Hanging out washing, like ironing, is one of those tasks long delegated to women, though there are many men I have known who iron and hang out washing, though none I know who have done so as regularly as me and many of my female friends, who hang out, not only their own washing, but that of their partners and families as well.

Washing has traditionally been women’s work, and still is I expect. And it’s soulless.

I’ve written elsewhere about my grumpiness at Helen Garner’s tribute to the writer Elizabeth Jolley, wherein Garner writes about the honour of making up someone else’s bed.

‘It is a privilege to prepare the place where someone else will sleep.’

Bed making is another task like hanging out clothes on the line. It might be an honour to some but to me it’s drudgery.

If Helen Garner had needed to make up other people’s beds regularly, year in, year out, or worked as a nurse or nurses aid in a hospital where they change beds several times a day, she might not then consider bedmaking such an honour.

It might be a literary honour to be able to write about making up a bed for someone you love, but the day to day grind of regular washing or ironing and bed making is anything but tedious.

I have begun to resent so many of these chores in life.

Even the business of showering and teeth brushing seems a burden.

Is it because as the years drag by and with each passing day, these regular tasks become more monotonous. Not that I could abide my body unwashed, my teeth unbrushed.

Still, as my husband sometimes jokes, I wish someone else would do it for me.

Then I think back to my mother who, during her last five years on this earth, had lost the ability to shower herself and so a helper came three times a week to help her in the shower.

My mother never told me how she felt about this. She accepted the task with good grace.

But I can remember the one time after I broke my leg and stayed in hospital for a couple of days when a nurse offered to help me in the shower. I declined the offer.

As long as I could sit on a shower chair with a plastic bag over my plastered leg, I could manage alone.

So, as much as I might begrudge these daily life chores, the thought of not being able to tackle them appals me.

Which brings me back to my purple happy wanderer.

Some time ago, my husband strung a wire along the side fence, onto which he might twine the plant’s tendrils as they grew.

I pulled the tallest of my happy wanderer’s coils out for length, hoping to weave at least one through the wire and so train it into place, but they were too short.

At this end of my life, I’m struck again by the part of me that still wants to force things into happening too soon.

For years, I imagined myself as one year older than I was and until more recently I have a more accurate sense of my age as I’m living it.

Still, the older I get, the more I feel the layers of time behind me, with fewer layers ahead, and more and more I begin to imagine what life might be like without me in it.