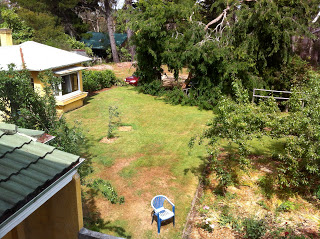 My husband left the flame under the pan this morning
after he had cooked up a batch of bacon and chorizo. When I walked into the
kitchen to fetch my second cup of tea for the morning the place was grey with
smoke.  He was reading the newspaper at the kitchen table and had not
noticed until I pointed it out and then we discovered the overheating fry
pan.
Open doors and apologies all round.  The smoke
has dispersed though the smell of burned fat remains.  It could have been
worse.  It could have been kippers, another of my husband’s favourite
weekend breakfasts, and one which leaves its traces in the air long after it’s
been eaten.
I can’t get Varuna out of my mind.  The smell of
the house, musty, the green of the garden and its warmth.  It can get cold
in the Blue Mountains but I have only been there through the sultry heat of an
early summer, when the weather is unpredictable in the form of heavy storms,
early mists, higher temperatures and rising humidity. 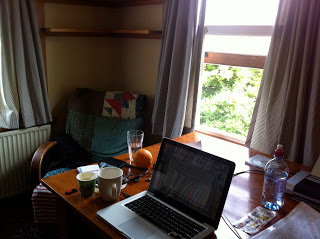 Varuna, outside my window, and inside the Green Room.
‘Let my nerves be strained like wires between the city
of no and the city of yes!’  Yevtushenko.
These are the words that someone had penned onto a
scrap of paper in blue ink and pinned to the fridge in the kitchen at Varuna.
They have stayed with me as a reminder of the tension between
writing and life.
Yesterday my youngest daughter went for her driver’s license
and passed.  It’s the end of an era for me.  Four daughters, all of
whom can now drive a car, or at least are licensed to drive.
To me it’s a major achievement largely because it took
me so long to get mine.  I had left home by then but even if I were still
at living at home I could no more imagine my father taking me out to practice
driving than asking him to walk me up the aisle.  Neither of which I did.
Instead I left learning to drive until I was in my
early twenties and into my first proper job.  I paid for driving lessons
from an instructor who took me out sometimes twice weekly in his turquoise
Datson Z.  We drove through the streets of Caulfield.
In those days I had broken up with my first long term
boyfriend and shared a flat with my youngest sister in Narong Road.  My
driving instructor may have had an islander background judging by his dark
complexion and shock of wary hair.  He was kind and competent.
‘You’re phobic about driving,’ he said to me one day
after months of seemingly getting nowhere.  I drove all right but I
panicked whenever I needed to make a major change, for instance whenever I
needed to go down the gears to slow down or to stop.
I failed my license twice as a result. The first time
I could not bring myself to stop when a man with a wheelbarrow crossed the
footpath of the exit to the driving school.  I nearly ran him over.
The instructor stopped the test immediately.  The second time round
I failed because I completely stuffed up the parallel parking.  By rights
I should have failed a third time because I could not master parallel parking
but my final examiner took pity on me and let me through.
I have not been able to parallel park since those days, but if there is a large enough space between cars I can now reverse
into place without too many turns of the wheel.  I’m comfortable driving
these days but I was such an anxious driver in my early years that I have
worried about passing on these anxieties to my daughters.  It seems I have
not succeeded.  They are all more confident behind the wheel than I ever was.
I think I may be experiencing similar difficulties as
I experienced learning to drive in relation to writing my book,  not
writing it per se, but putting it together.
It is as if I have trouble getting the gears to work
in harmony in order to master my story.  You might have noticed, a
tendency to be all over the shop.
Still, I tell myself, I will get there.  What
other writer hasn’t struggled in such an endeavour?  Besides, I learned to
drive in my twenty second year finally and I have been driving ever since, give
or take a year when I first held my license, but was too scared to use it.  Now that’s another story.