When she sent me the email, I thought I could die. Her words so simple on the page were full of poison.

I had found the eggshell by the side of the road on the small strip of grass called the nature strip. Someone must have mowed it recently but they had not done a good enough job. Bits of grass sprouted at the edge by the gutter, like a badly cut hairdo. Long weeds stuck out from under the sprawling ti-tree in the middle. The ti-tree had grown in that straggly ungainly way of trees when they are close to the sea.

I found the shell on the grass between the ti-tree and the gutter. It was pale blue and speckled in green. Its edge was crusted with the egg yolk yellow of the embryo that once must have been tucked inside.

I do not know what made me pick it up. Some sense of its fragility, its beauty, its connection to the earth. Instinctively I took it to my nose. It smelt the way a stone smells when you breathe on it. It carried the smell of wind and rain, the grassy smell of a hot day after a heavy soak. 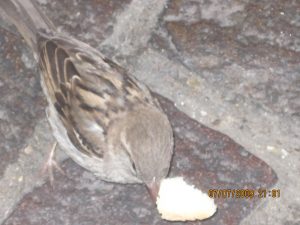 I stroked its smoothness. A tiny bit crumbled from the edge and fell to the ground. I would keep the shell, I decided then, as a souvenir of her.

A souvenir of the day I last saw her, the last time she held my hand.

That’s what she said then. She said it, I heard her words loud and clear. I heard her make the promise.

‘I’ll be back. Soon,’ she said. ‘I swear. Besides I have to be back for the next exhibition. I have too much at stake.’

At first she wrote me long loving letters, on purple notepaper in her fine spidery scrawl.

My mother is up and down, she wrote. She’s frail. Not long now.

I was understanding then.

What daughter could leave her mother to die alone? I was understanding then that I must be patient. I had cradled my eggshell in a piece of tissue paper in an old soapbox in the bottom of my study drawer.

From time to time I looked at it, as I look at it now. It was fading fast. The hard shell around the thin milky inner skin had come away. My half shell had become a quarter. Soon it would be fragments.

A year ago she sent a note and inside enclosed a card containing all the details of her mother’s life and death.

Her letters came fewer and further between, their content thinned to a list of her activities, those she had seen, what she had done.

No longer did she share with me the inner workings of her mind.

I thought of her often. Every time a new exhibition opened at the gallery, I wondered why she had not comeback to exhibit her work, why she had decided that Germany could offer so much more to her than here with me.

I looked up her name on the Internet, nestled in among the names of other print makers. I found her alongside the famous, Monique Gilbre, Antonia Boudin, and knew then I had lost her.

There was an email address at the foot of the page alongside her name and a copy of the details of her latest exhibition.

It would be easy to reach her.

Letters are slow, I thought.

Letters lose their passion, letters cannot convey the urgency of my need for her, but an email. A message now shot from the heart. A call that could cross the ether, that would bring her back to me, would bring a message back to me.

I waited a month, a month maybe two. But I did not hear.

What could this mean? It must be a wrong address, a changed address. The university where she worked had a website and again I found her name with a new address. I sent her another email, a last arrow into the darkness, my last call.

And then her reply.

I was mistaken to think she still cared.

Here now, I peel the eggshell from its tissue.

I crush it inside the hollow of my hand. I rub the powdered grit into the small of my hand, one hand on the other, rubbing and rubbing until all trace of the shell has gone, pulverised, like the image of my friend, then I press the delete button.

14 thoughts on “The frailty of friendship”