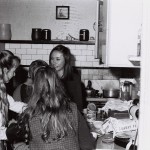 9 thoughts on “The water is wide”