For the first time in my married life, I’m not wearing rings. Not as a statement of intent, but simply because the fingers on my left hand with its broken wrist could not abide any extra weight.

The moment the triage nurse took one look at my rapidly swelling hand, she told me to get those rings off.

It was easy enough to peel down my eternity ring, the one my husband made several years ago, a Russian wedding ring of three bands in white gold, yellow gold and rose. But my wedding ring itself was beginning to hold firm behind the pressure of my swelling fingers.

Just as the nurse went to get some lanolin to help shift it, my husband managed to stretch it off against my cries of pain every time he so much as tweaked a finger. He removed it in the nick of time.

Had we not been able to get them off, these rings would most likely have needed to be taken off with a saw. There they are now in front of me on my desk, three lonely rings waiting for fingers on which to keep them warm again.

The day after my fall, when they tried to reset the bone manually under anesthetic – not quite as they wanted – they decided on surgery.

And so it was on the Sunday I found myself waiting in the pre-surgery holding zone. Typically you wait in this area for only a few minutes in which time the anesthetist visits and sometimes the surgeon, and all this in readiness for your surgery.

When I first arrived, the orderly propped my bed against a wall, between two other spaces, which were soon occupied by other patients also on their way to surgery.

As each patient came and went and I half-enjoyed overhearing the conversations about their surgery and circumstances as a way of killing time, I also began to feel forgotten.

The nurse in charge, Brigid, who stayed in the holding bay area the whole time was busy with paper work and greeting new arrivals, of whom there’d have been four or five during my wait.

Brigid had greeted me on my arrival, taken my details and promised the anaesthetist would be there shortly.

Two hours later, no anesthetist and I was beginning to feel sad beyond measure. I didn’t like the idea of being a nuisance patient so I didn’t want to ask ‘what’s going on?’ or make a fuss. I just flopped on top of my bed and felt helpless and sorry for myself.

This was made worse by the fact there was a television screen propped above my bed at my feet and running the whole time. I had nowhere to look but at the screen or beyond to the periphery of the holding bay.

At one time, soon after I had arrived there, the TV showed these scenes of snakes caught in a drain and being pulled out by some bloke trying to impress his children.

But the worst involved this scene set somewhere in the Galapagos Islands I think, or in similar terrain where a hatchling lizard with short stumpy legs sprang forth out of the sand into the daylight.

The Richard Attenborough type voice over talked about the hatchling’s dangerous climb up the rocks to safety from the moment of its birth.

This little lizard was surrounded on all sides by an army of black slithering snakes, which advanced upon him, managed to catch him and bound themselves, snake over snake, around him. Somehow the lizard managed to escape and ran on determined across the sand, and up the rocks with still more snakes in pursuit. It seems he survived.

I’m not phobic about snakes but this one sent shivers through me and left me in awe of the awesome awfulness of the natural world.

It felt like a way of remembering my surgery forevermore.

And then there were scenes of this gigantic spider, a black thing as big as your fist. The animal dramas went on and on.

Eventually, I couldn’t stop myself and the tears ran down my cheeks, in spite of my determination to hold it together. All these people attending to other patients and I didn’t feel I could complain or ask for anything.

One of the surgical assistants, or it might have been an anesthetist, noticed my distress and came over. I told her I’d been waiting a long time and the television in my face was distressing me. She was dressed from top to toe in blue overalls, with a shower type cap on her head and covers on her shoes, like everyone else, including me, all with hairnets over our hair.

‘The worst of it is not knowing what’s going on,’ I said.

She then went off in search of a tissue for me, which she couldn’t find anywhere, but also obviously talked to Brigid who came over with the TV remote, which meant I could turn the TV off.

I told the kind woman that I’d have preferred to read and she brought over a tray of magazines and we rifled through them hoping to find one of interest, but after she’d gone and I began to flick through the magazine she’d chosen I realised, without my glasses, I could only look at the pictures.

So I stared into space and listened to the frustrations of another surgeon who’d come to operate on a young woman who, from my eavesdropping, seemed to be in enormous pain from something within or around her abdomen.

The surgeon wanted her to pee before surgery and he sent her off to the toilet, and she struggled to walk as she leaned into her husband’s shoulder. She took forever to give up the required pee, probably because of the morphine, one of the nurses said, and the surgeon who stood outside the toilet door, which was to one side of the waiting bay area – I knew because I’d gone there myself after the first hour of that interminable wait – grew impatient.

Eventually, the surgeon all but banged on the door and told her to give up. He was on a schedule and couldn’t wait any longer. He’d catheterise her, he said, once she was under.

I could tell her English was not terrific, this beautiful dark haired Madonna whom I watched stagger past the foot of my bed, with her husband’s assistance, and back to her bed in the holding area, ready for surgery.

And the image that stayed with me: her pink underpants hanging loose over her husband’s shoulder.

This Madonna also wore a regulation backless hospital gown but she’d told one of the nurses earlier she preferred to keep her underwear on. I’d given up on mine a long time earlier. What was the point?

There is no dignity when you’re a patient in hospital.

They wheeled Madonna off and soon after a person from my surgical team came to say that my surgeon, was operating still on his first patient, a man in his forties, who had fallen from a ladder and broken both his wrists. Surgery on the first wrist had been straightforward, the surgeon’s associate told me, but the right wrist, which was the man’s primary hand, was proving much trickier and needed more time.

I wonder what became of my Madonna, and of the man who fell from the ladder, about whom a friend said later, after I had shared some of this story,

‘He won’t even be able to wipe his botty.’

I settled down then, just knowing what had caused the hold-up and soon after they came for me. My anaesthetist, a small spectacled woman who reminded me of my favourite nun from school, was not too fussed about my low heart rate. But when they strapped me up on the operating table and the assistant nurse noticed my skyrocketing blood pressure she came up close to my face.

I wanted to say, I’m sorry. I didn’t plan for this. My blood pressure soars when I’m under stress.

Perhaps she did not realise this. Nor could she or any of the other nurses and doctors abide my consistently low heart rate.

It must be an anomaly, they said, to be so low and with no symptoms.

And so it went on. My body refusing to cooperate, deviating from the norm.

My mind was a mess from this sudden break and interruption to my life, unplanned, unpredictable and filled with the horrors of the sudden accident and Bad Fortune. But my manuscript, which sent me to the stationers in the first place, still sits near by my rings. 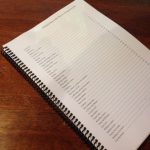 8 thoughts on “This cruel waiting”