In the summer of 1968, when I was at my fattest and the rest of the world was in turmoil – Prague Spring, civil rights unrest in America, fights over apartheid in Africa and everywhere revolution in the air – I changed my status as a day scholar at the convent in Richmond to one of boarder.

My oldest brother had hatched a plan that we four youngest children should be sent away from home so that our parents would be free to sort out their affairs without the added pressure of children.

That makes it sound like it was an act of kindness to my parents. For my father it might have been. We were a burden to him, but I prefer to think that it saddened my mother. That she found life without any of her children difficult, as much as it might have freed her up to sort out her husband’s alcoholism.

However she might have done that, I do not know.

But my brother’s plan was fixed, and based on his knowledge of what had gone on between my father and sister, he had the upper hand. His word became law.

And so he found homes for all of us.

My sister and I were first to live with another Dutch family and when that fell through we went to boarding school.

In my most sorrowful moments, I thought it outrageous, the idea that any self respecting sixteen year old should be sent away from home, first to live with another family and then when that other family no longer wanted her, to go back to her school, no longer a day scholar who could leave each afternoon and take the train home, to one who was in essence locked behind the school walls day after day.

The other boarders came from country Victoria and although some were given leave on weekends to visit family in Melbourne, by and large they spent the entire school term at the convent, chafing for the freedom of life outside, though no one ever said as much.

Boarders were used to the life of a student confined to a convent, where they formed close bonds with one another.

From within the boarders’ circle, day scrags were considered an inferior lot, and so it came to pass that I moved my status from day scrag to boarder overnight and the boarders were unsure as to how they might treat us. And we were unsure about how we might fit in.

To begin, there was the problem of clothes. Not just the school uniform, which we already wore, though we did not run to multiple pairs of stockings and blouses and tunics and dresses. We had always managed with only one of each, and we washed them overnight as needed, at home.

But at boarding school, the nuns sent around a laundry basket at the end of the day in which the boarders threw their underpants and stockings from that day, all clearly marked to be laundered elsewhere.

It was tricky holding back my stockings to wear several days over given I had only two pairs of each, which was more than I had at home; tricky to retrieve the one in readiness for the next time I needed to wear them, which happened every day.

Boarders stayed in uniform all week long even on weekends. It was tricky too as our labelling system, a permanent marker of our intials on the tags let us down and before long it was hard to identify which stockings were mine, and which not.

I sometimes found myself in stockings that might not have belonged to me, but no one else complained, so it went undetected.

The underpants problem was worse still as boarders had to wear regulation underwear, a pale brown colour, which my mother could not afford, so we went the closest and cheapest alternative possible, a pale pink from Woolworths and our non-regulation underwear stood out in the pile of clean washing that returned to the dormitory every afternoon in readiness for the next day.

This was one of the trials of that year, 1968, when I became adept at hiding my need for clothing, the limited amount of my clothes, the regular sense of being inadequately dressed and the arrival of the dreaded periods.

My mother visited the convent a couple of times in the eight months during which we boarded and both times she carried with her a pack of Modess, a ten pack, which lasted only the length of one period per each. She hid this packet in her basket in brown paper.

You could only buy sanitary napkins from the chemist and they were stored in brown paper so that no one would be reminded of the fact of women and their periods.

When we ran out of pads we used rags from the science building, which I could get rid of in the freshly installed incinerator in the newly built science block, but it was hard to find my way there in the middle of the day when I should have been elsewhere and on weekends too, whenever the need arose.

My mother hid herself from view on these visits. The nuns let her through the back door into the parlour where they entertained special visitors after hours and we met her there.

Our mother was meant to be overseas and none of the students were to know the truth behind our sudden change in status. We had spun a yarn about our parents travelling to Holland as our excuse to board. It would not do to tell them that our parents were in trouble and needed time out to clear up their differences.

So we pretended to be a wealthy family whose parents could afford a trip overseas where they stayed for several months, leaving all their children home and in various states of care.

The older ones could fend for themselves, but my youngest sister and brother, the two little ones, lived with an older brother and his new wife and baby and they sometimes wrote me letters full of spelling mistakes about how sad they were.

My youngest brother, then eight, took to wetting his bed again and the shame screamed at me from the pages of his notes about missing home.

I had no time to think about the others in my family given my own desperation to get by.

The list of things I needed to hide included my teeth, rotting in my mouth and the occasional outbursts of excruciating pain when one of the nerves behind each rotten tooth decided to throb.

All the toothpaste in the world on the open holes in my teeth could not stop the pain. Only time could stop it.

I lay in bed at night and counted the throbs as I prayed to the blessed virgin to bring me relief, which came often enough so that I could go on as a boarder without any need to report my pain.

The problem of my weight first hid itself under my once roomy uniform, but when one of the nuns, noticed my suspender belt cutting into my dress from behind and told me to tell my mother I needed a larger size, I collapsed into another lather of shame.

The nuns loaned us dressing gowns as we did not own them at home but they could not find any spare slippers in their store cupboard, left over from previous careless boarders, so in the evenings after we had dressed for bed, we walked around to visit the toilet for the last time and to brush out teeth in bare feet.

It did not trouble me in and of itself, the cold tiles underfoot, but I sensed the other boarders’ disgust at my bare toes.

Who did we think we were masquerading as proper people among the neat and respectable country girls from wealthy farming families whose parents could afford the fees necessary so their daughters could attend boarding school? 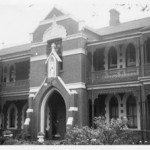 We should have been day scholars.

I wanted to go home, however horrible home may have been. I wanted to be free to be my own miserable self away from the need to pretend to be someone I was not.