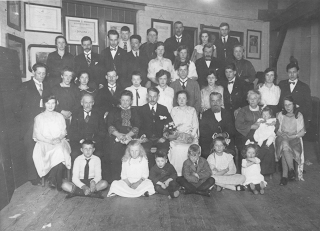 Varuna, the Writers House.
And so I took the
train through places whose names are familiar to me, through Blaxland, Westmead
and Penrith, Emu Plains, Wentworth Falls to Katoomba in the Blue Mountains.
Here in the Green
room I have a view at the corner to east and south or north and west.  I cannot tell which because I am
geographically challenged.
I have come to
Varuna to find my father, or some semblance of him in a deeper directionality
than I have known to date.
Within half an
hour of my arrival a storm typical for this time of the year erupted.
Unplug, for fear
of storms.  The house sits on an
iron stone, and therefore despite all the precautions in the world, the manager
tells us, ‘It’s safest to unplug.’
A breeze dense
with the smell of rain pushes against the curtains and washes away some of the
musty smell of this house in which countless writers have penned their
words.
I look at the
photo of my father as a boy, maybe six, maybe seven.  He sits on the floor cross-legged, one in a row of seven
children who sit in the first row in front of the adults at what looks to be a
wedding shot.

My grandparents
are there too, in the corner first row standing behind the seated adults, which
include the wedding couple.  I
guess they are a married couple because the woman in white carries a bouquet,
but she has no veil.
The photo could
have been taken in Freud’s time though not in Vienna, but in Haarlem, Holland
where my father lived for his entire childhood, and where my father met my
mother and from where he took her to Australia before I was born.
I do not know why
there are tears behind my eyes when I look at these photos, something about my
inability to make sense of these times and these people, especially of my
father and my father’s father and his mother.  The mystery of these people.
The boy who was
once my father’s has lowered his head but he lifts his eyes towards the camera
as if he mistrusts the person taking the photo and his arms are folded.  Some of the other children in the photo
fold their arms as well.  A
technique of the photographer in those days to keep the children still perhaps.
No one smiles as
is the custom in these old photos, several are caught at that moment with eyes
closed, including my paternal grandfather, the one who looks to me as though he
could never be a relative of mine.
My grandmother on the other hand looks like me, the same long face, the
angular chin.
My great
grandparents are in this photo, too.
They sit on the side of the bride and I can only assume that this photo
was taken at the wedding of my father’s aunt.  Apart from my father, I knew none of these people unless I
am to include my aunt Nell who might well be the baby in the photo seated on my
great grandmother’s knee.
Nell, I have
met.  Nell who was named after my
grandmother, Petronella and whom I by rights should have been named after but
by the time I was born my mother tells me, my grandmother, Nell was ‘in
disgrace’.
‘What did she do?’
I asked my mother, even as I have some idea of the answer.  I want my mother’s view.
But to ask my mother questions such as
these plunges her into a fug of memory to which she does not want to
return.  I can see it in her
eyes.  That glazed look.  A look that says, ‘Must we go there
again.  I can’t bear to think on
it.  I only want to think about the
good times.’
My mother is
93.  I should leave her in
peace.  I should not trouble her
about these things, but I cannot help myself.
I worry at these
thoughts like a dog at a bone.  I worry at these thoughts as if I am scratching at a wound
whose scab is dry and ready to shear off but I know I should leave it scale off
without help from me. And yet I persist.
‘We know she was
imprisoned for embezzlement, but there was more to it than that.’
Your father had
nothing to do with it, my mother says yet again as she has told me before.  An inspector came to our house.  An inspector with brass buttons on  his coat, brass buttons that my mother
tells me were signs of his authority and he told my mother that she had nothing
to worry about.  That my father had
left home well before the events that led to his parents’ imprisonment took
place.
But what did they
do?
‘Something
sexual.  Something with the
children.  The girls I think.  The boys, your father, they saw
nothing.’
‘How can you be so
sure,’ I say to my mother as I peel back another layer from her denial.  How can you be so sure given what he
did to us?
Even as I write
this now I agonise over the name I might offer my older sister.  It is against the law to name the
victims of incest in courts of law in the public domain.  It is all to do with protecting the
innocence of the victims.  I have
never understood this.
How can the
victims be held responsible for what was done to them as children and yet in
concealing their names it is as if we blame them in some way?
It comes down to shame.
We are safe to
name the dead, but not the living, for fear of shame.  You cannot shame the dead.

15 thoughts on “You cannot shame the dead”