The year she turned eighty-five my mother wrote a letter to all nine of her living children. She wrote it by way of apology.

I imagine she wrote this letter seated at her round table in the dining room of her tiny unit at Park Glen, the retirement village to which she had moved five years earlier.

She wrote it on a sheet of lined foolscap paper but by the time my older sister had photocopied the nine copies necessary – at my mother’s request – the lines had disappeared.

My mother must have written in her best handwriting, as the words are legible, unlike in earlier letters she wrote to me alone. 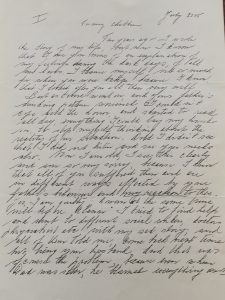 There were three things that struck me after I read my copy of my mother’s letter:

How I would respond?

And who received the original?

More recently, this same sister was clearing out her garage and she came across, not only her copy of my mother’s letter to us all, but also another letter my mother wrote to her alone.

My sister read out my mother’s letter over the phone and we wept together hearing again our mother’s thoughts about my sister’s hard life and her pain.

To this, I added a pain of my own, the pain of not being the one of all those children, not the only one but one of the eight children who, by default did not deserve a letter of our own.

I decided then, should I ever write such letters to my children, I will not write a group letter, instead, individual letters to all my children, each letter expressly designed to address the child in question.

I recognise it’s not so hard for me. I have only four children and nine is a long line of letters to write.

It’s not surprising my mother should choose to address us all equally.

Most of my siblings, as far as I know, did not respond in any way to our mother’s letter.

I presume they read it.

I presume they felt something in the sting of it, but as far as my mother had told me at the time, only three of her daughters talked to her about her letter.

Not one of us wrote back. And I include myself here.

I acknowledged my mother’s letter but it did not occur to me at the time to wonder what it must have been like for her to write such a letter and also to be met with silence from most of her children. 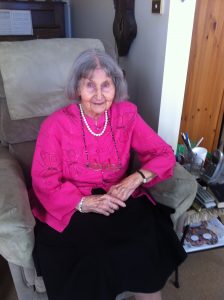 I’m twenty years of age away from reaching my mother’s age at the time she wrote this letter, but it occurs to me now that she wrote from the wisdom of her years and although one of my brothers disparaged her efforts as manipulative, I wonder whether a degree of empathy is called for after my mother’s long life, lived to the best of her ability, however much littered with mistakes.

My mother’s letter is one long apology and one long explanation of her position in making the mistakes she made.

She wrote it when she was eighty-five years old. It deserves recognition.

8 thoughts on “You deserve a letter of your own”