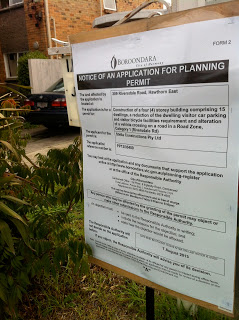 A young woman came to my door just now and interrupted my
morning writing reverie.  She tells
me she’s doing a door knock in the area because she and others who live nearby object to the application for a four storey block of flats over the road from us that is about to go
before the planning tribunal. The plans do not include space for visitors and the
neighboring streets are already overcrowded.

I understand her distress and yet I wonder about these
things.  To make room for the flats, they will pull down
a single storey dwelling called the Dance Studio.  It’s an old and unprepossessing house that has been here for
at least the past forty years.
The house is striking only because of its fence – now ripped down – wrought iron and shaped like a musical
scale with the first few notes of what could be The blue Danube or some other
such waltz.  It also has a round
driveway so that cars can turn in and go out onto busy Riversdale
road.
The house has not yet sold but I
expect the owner might fetch more if he sells to developers who can make a
large profit out of four storeys of fifteen flats.
Once upon a time I resented this use of land but these
days I reckon we might need to build on top of ourselves to make more room for
others.
The urban sprawl has its
drawbacks.  More dense dwelling up
to a point is perhaps better.  Look
to France and Germany where many people live comfortable lives in apartments
cheek by jowl and they do not need all the accoutrements of a free
standing dwelling with back yard and front garden.
Maybe we can make better use of our space and make room
for more people as well.
When I was young
and growing up in the Catholic church, I took it as a given that Catholics were
the only ones headed for heaven.
It did not strike me as odd that there were many people around me who
seemed to live  decent lives who
would not get to heaven simply because they did not belong to the right religion.
I felt sorry for a protestant girl down the road whose father was the local
fruiterer. Come Sunday she wore the same sorts of clothes as she wore on
Saturday.  She never needed to
dress up for Mass, but I did.  She never had the pleasure of knowing there was at least one special day of the week every week.  She missed out, while I was among the chosen.
Maybe it’s that sense of us and them that I find myself
railing against now.  If only there
were some way of finding a compromise.  Likewise for the young woman who came to
the door.  Her complaints might
well be a start if they can be acknowledged and heard.
My fear is she does
not want any new establishment at all and money being the powerful persuader that
it is, she will lose out to the developers.
The same might apply to new ideas.  As I get older I try to make myself
tackle things that at first glace seem uncomfortable.  I try to look at people or ideas
that I would once have thought unacceptable from a different perspective.  But it’s not easy.  Old ideas die hard and it’s comforting to imagine I have reached some level of certainty about things.  And discomforting to realise I may be have had it wrong all along.

8 thoughts on “Among the chosen”