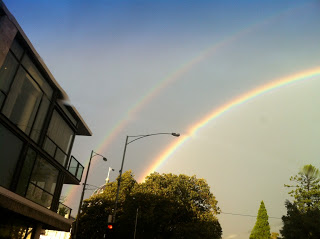 Driving home on Thursday I saw a double
rainbow in the sky.  I took it as a good omen even though I knew it had
nothing to do with me.  I’m sick to death of this dark and gloomy winter
weather and appalled with myself for feeling so.  I should appreciate all
the seasons but this winter has been too cold – and too long – for me.

I don’t know how people do it.  How
they write books.  After a week at it I’m exhausted.  It is such an
undertaking.  There are so many different strands to tie together and all
the time the editorial voice in my head is abusing me up hill and dale for my
pathetic attempts.
I’ve heard there are people out there who
love the process of revising their work.  I’ve heard there are those who
might struggle to get words onto the page but once the words are there they
love to spend hours polishing and refining them, dragging them into
shape.
And then there are others who might enjoy the first rush of words
onto the page but thereafter they want nothing to do with those words
again.
While I sat in my friend’s room in North
Melbourne trying to revise my first draft, I took time off occasionally to scour the
books on her bookshelf.  Most of them dealt with the art and craft of
writing.
I picked up one on revision.  It was
like running a piece of barbed wire through my brain.  The writer – I did
not take in his name –  talked about the importance of revision as part of
our struggle towards perfection.
He acknowledged perfection is an
impossibility, but he reckons the search for it is essential, to make the book
as good as we can possibly make it.
All the time I’m tempted to flush mine
down the toilet, to give up my feeble efforts as a writer and take up knitting
or some other less onerous activity.
Why do we do it? my writer friend asked me
when I was telling her how miserable I had been feeling.
I had hoped to write
here of a joyous week locked away writing and revising to my heart’s content,
instead I am left with a deep sense of dissatisfaction.  If only a double
rainbow could offer more consolation.

9 thoughts on “Barbed wire through the brain”