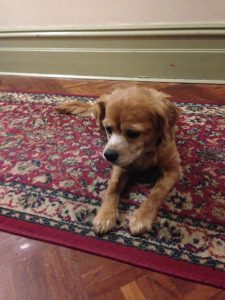 I took the dog out for a walk this morning. He heard me rattling his harness and bolted up and down the hallway, filled with a childlike excitement that always leaves me ashamed for the number of times I fail to take him out for a walk.

With harness in hand it took me several minutes to get the thing on. The dog hates to have things come at him. Even though I expect he knows I’m about to take him on that most pleasurable of events – a walk up the street.

I try the easy way, face first with harness over his nose but he backs away and then swings from side to side as if we’re into some game of catch-me-if-you-can.

But once I’m standing over him and behind he accepts the harness, to which I attach his lead and once again he’s pulling away up the hallway desperate to get out into the world beyond.

We’re scarcely free of the front door and he offers up his first pee, golden and fruity against the green and red of the kangaroo paws that line our veranda, then out onto the street for the next pee against the jacaranda on our nature strip.

It’s a warm morning and I’m on a mission. A doubling up of jobs. To buy sandwich fillings for lunch: ham, salmon and cheese, but also to appease my conscience by taking the dog out of his solitary, stationary life at home.

He pulls at his lead, ever wanting me to go faster, to run, but I refuse and yank him into a fixed and steady pace in line with my walking.

Already I’m wondering when he’ll take his first shit. When he’ll start that circular movement in the middle of someone else’s nature strip to signify the call of his bowels.

I have become obsessed with the dog’s bowels over these past several weeks ever since things started to come out of him all-wrong.

The vet diagnosed an acute case of pancreatitis or some such infection that caused this otherwise energetic dog to lose interest in life, in food, in walks and companionship.

He took to curling up lack lustre in his bed until something stirred inside and sent him out to the back garden again and again, through the cat door where he strained on his back legs underneath the washing line and out came the most vile red coloured liquid shit.

We panicked then, deciding he would die at any minute but antibiotics in time put him right again.

Today five houses up from Beaconsfield Road over the way from a two storey Queen Anne house, the dog produced a wonderful consistent khaki coloured stool that gave me the same joy I felt when my babies first offered up their insides into their nappies. That wonderful smell of new mown hay that comes out of a baby before the introduction of solids.

I felt the strangest pleasure as I bent down with my plastic dog bag, the one sealed in a red bone shaped container attached to the lead to collect the warm scrapings from my dog, careful to avoid contact with my skin.

And we walked on towards the supermarket past the houses that line this street. Houses I’ve walked past over a period of more than thirty five years. Houses that have changed little with the exception of one no longer visible.

The demolishers have ripped it out and lugged it away, piece by piece, to leave behind an empty patch of dry ground on which presumably some else will rebuild one day.

I felt a pang of sorrow at a remaining sign on the front cyclone fence that read ‘Tank eater in use’. Remembering the white weatherboard house with its full return veranda and carved entrance way that once stood here. Its proud owners, gardeners who aimed to keep their place pristine.

I found a rubbish bin in a nearby garage down the laneway and deposited my dog bag full of poo fearful of being spotted by the owners of the rubbish bin but hopeful they might not mind.

As I would not mind given this rubbish was sealed and ready for disposal.

As usual the dog was oblivious to all of this. Domesticated darling, and I had fulfilled my duty. To humans and animal alike.