For the past few days we’ve been living under a threatening cloud. Heavy rains are happening across this state and at any moment you could be flooded.

Alert messages on your mobile. Reports on the news everywhere.

Here’s a good example of climate change, but climate change gets no mention. The authorities only urge us to take care and in the process some of us get spooked.

I tend to take situations such as these with a grain of salt, not the fact of climate change but the doom mongering.

Still, I don’t live in a regional area, like Euroa, where flooding is a serious problem.

This weekend even city folks avoid going out onto the streets or going to appointments because it’s dangerous on the roads.

The warning is a blanket warning that applies to all of us everywhere across Victoria but only some of us will be affected. Yet we must operate as though we are all in peril.

It’s pernicious, this spread of anxiety, while elsewhere there are folks peddling ‘fake news’ so that we are even more alarmed about things that we might be less concerned about if we knew the truth of the matter.

And then there are other still concerns that go under wraps.

I’ve been thinking about how to engage in a conversation about incest. Not the most sexy of topics, incest.

People’s eyes glaze over at the mention of the word. One of the greatest taboos in our society.

The other day, I came across an essay written in 1997 by an academic, Laura Frost about Kathryn Harrison’s memoir The Kiss.

Frost describes how problematic it is when a person writes about having a sexual relationship with their father during their early twenties.

I read The Kiss a number of years ago and relished the beauty of Harrison’s writing. I trembled at the degree of her suffering, made worse, I expect, because of the reception she copped.

So many people reckoned she was simply cashing in on the salacious side of things.  She was taking advantage of her story of going off and conducting ‘an affair’ with her father. ‘Dating [your] dad’, as one reviewer, James Wolcott described it, when to his mind, Harrison should have kept her mouth shut.

How could she write such stuff? What about her children? Would they be traumatised to know their mother had behaved so badly as to go about having ‘an affair’ with her father and then worse still for Harrison to write a book about it so that all the world could read about her bad behaviour.

The bad publicity may well have promoted Harrison’s book, but the attacks on her integrity as a mother who should have protected her children from the knowledge of her ‘affair’ with her father must have been devastating.

How can we call such an experience an affair, as if one day a daughter ceases to be her father’s daughter – at any age?

Anyone who’s ever been a daughter and knows something of the thrall cast by a father, especially this father, who was not just a father but also a minister of religion, would wonder.

In my family, we girls fell in love with the priests, too.  A different type of father. We got it from our mother.

We hung around the church outside the presbytery just to get a glimpse of the curate.

The oldest girl had easier access. She used to get up at five o’clock in the morning and walk to church for early morning Mass. She might have been one of the few members of the congregation in the church at that time and surely the youngest.

It was easy for her to chat to the curate (assistant priest) after Mass.

This curate set the scene for our addiction to priests. He even came to visit our house and although it took me no time to work out that he was coming to see my oldest sister, her company alone, it pleased me to be able to be in such close contact with a priest.

In those days the priests wore black with a white dog collar.

The curate was tall and angular, but most striking was his accent. It rippled like water over rocks, a thick Irish brogue unlike any voice I had ever heard except on television,

I sometimes wondered whether my mother noticed the way the curate looked at my sister. Or did she wish his gaze was for her, as I had wished it was for me.

Few of her critics seemed to consider her father’s behaviour. This consensual relationship between an adult daughter in her late teens /early twenties and her priest minister father should not have happened but the daughter copped the brunt of rage.

Why do people hate it when people who’ve gone through the hell of sexual abuse start to speak about it, to write about it and raise their voices, to say this happened to me and it was awful?

And also sometimes thrilling, playing havoc with our desires.

When I was twelve: 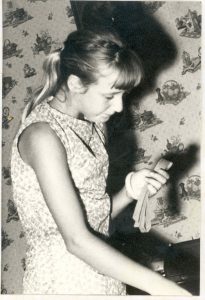 Why is it that people find it so hard to offer a compassionate response when such revelations come to light?

Why do we hate the ones who’ve slipped this way?

I ask these questions and I suspect I have some answers, including my suspicion that many people don’t want to be unsettled by the complexity of parent/child relationships once disrupted by incest.

More so, they don’t want to consider the possibility that a twenty year old woman still has a particular relationship with her adult father that is loaded.

It reminds me of the difficulties people have when they hear of a mother who once relinquished her infant son to adoption, say twenty or thirty years ago, and then encounters her child in adulthood, only to fall passionately and sexually in love. They call it: Genetic sexual attraction.

There are multiple possibilities in such encounters but one possibility and it happens more often than people want to know, mother and son (usually hetero, but it could well happen with same sex parent/child connections or with biological siblings and biological fathers), fall in love with their long lost daughter, son, brother, sister.

This again constitutes incest despite the fact that both parties are adults at the time of sexual union.

It unsettles us to hear about these things because again the adult/child bond is violated.

I’ve been thinking about incest ever since my book came out because I’m keen to explore the  taboo but I fear it’s not a topic people want to consider for too long given it’s power to unsettle.

We find it easier to panic about storms ahead. At least they’re concrete and visible, but emotional storms are not so easy to negotiate.