I’m sixteen years old in a brown uniform that has enough pink to make it the colour of mushrooms. I spend my days dressed in this uniform, as my parents have shipped me off to boarding school. 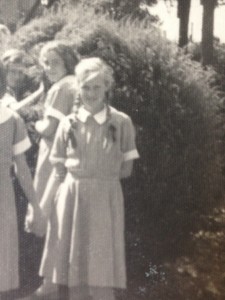 To be more precise, my oldest brother has made the decision that I should leave home along with my younger sister and together the nuns have taken us in so that we can have a roof over our heads while we continue our studies and in time get a place at the university.

The convent roof is terracotta red only I can’t see it from within the school grounds, except low down near the gutters where the tiles on the main building slope down. Otherwise you need to stand well back from the building out on the street in Vaucluse Parade to get a better view.

Even from here, you have the problem of the high fence that surrounds the school to keep girls in and to keep intruders out, and the trees.

There are trees along most of the perimeter of the school, trees that act like prison walls only some of them can be climbed.

Not that I climb them. I am no revolutionary.

In fact, my way of getting along in this life of boarding is to conform. Not only to conform to the expectations and wishes of my teachers, most of whom wear the black habit of nuns, but to be a sycophant, not that I know this then.

If I I had known, I’d cringe to the roots of my hair.

I am excessively polite to everyone. I make it my business to get to know the name of every girl in the school from year seven up. Not so difficult given the school is small with some two hundred pupils at any time.

I have worked out that the best way to get along is to love everyone, like the bible says: ‘Do unto others as you’d have them do to you’. That way you’re safe even if underneath it you hate someone to bits.

You never let it show.

Maria Rizzo hates me. I recognise this from the sneer in her voice whenever she is forced into an encounter with me, as when we are on a shared project together.

I recognise it from the way she pulls her friends aside to let me pass during recess. She does not want to include me.

Much as I try to keep on loving Maria Rizzo, I find it hard.

She is dark haired and olive skinned with the look of someone from the Mediterranean and I can see that she might struggle, too, like the other girls who come from Greece and Italy, the other girls whose skin is not pale like mine and whose hair is dark and rough in texture, a roughness that can make such hair hard to tame.

The girls from Greece and Italy in 1968 in a convent school in Richmond, Melbourne are the most unwanted ones, apart from Juliana Kibble who might well have been Australian, though her second name suggests someone foreign from England.

Most foreign of all, she walks around the school and keeps to herself.

No one wants to go near her.

Is it that she lets off a bad smell?

Her uniform looks clean enough, cleaner than mine, but she has a look of neglect. The look of someone, irrespective of uniform or her dark hair tied back in a neat ponytail, of someone you want to avoid, or else she might contaminate you with something of her abjection.

And you would become one of the outcasts, the unspeakables.

No, it is better by far to go around the school with the biggest smile plastered on my far too thin lips, making sure to keep them closed so that my teeth do not show, otherwise others might see that some of my teeth have turned the yellow brown of rot.

I befriend Juliana Kibble. I am kind to her even though she makes it hard work by not reaching out to me or to anyone else in the schoolyard.

She sits on the edge during basketball matches and while others huddle together in groups to applaud the home team when they play against visiting schools, Juliana looks as though she lives in a world of her own.

People keep a wide arc around her.

In 1968, a year as long as any other, with the usual summer, autumn, winter and spring, the seasons stay the same for me apart from changing from the mushroom brown linen school dress with its short sleeves and white collar for warm weather, into the navy tunic and white blouse topped off by a dark blue jumper and blazer for the cold.

We are not permitted to wear our blazers by day, but only when we are out on the street or during religious ceremonies.

Some girls try to keep their blazers on during class time because the rooms are Antarctic cold but they displease their teachers even as the nuns can keep warm under layers of fabric and fingerless gloves and the lay teachers wear winter coats and scarves.

‘Character building’, I hear the teachers say and go along with them in my attempts to build my own character into someone who is strong. Someone who can withstand the cold and the hatred of Maria Rizzo, along with the eerie silence of Juliana Kibble and the insults of the mathematics teacher who only likes girls who are good with sums.

I smile at this mathematical nun when she hobbles past, crippled by arthritis in her fingers and toes.

‘She’s only like that because she’s in pain,’ my sister tells me.

But my sister is better with numbers than me, nor does she choose to spend her days trying to make everyone like her.

Her job is easier. Or so I think in those days of revolution when I should have bucked the system.

When I should have tried to find a more purposeful way.

Instead, I figured if you’re in prison, then the best way to get along is to befriend guards and fellow prisoners alike, and not offend a soul, even if someone like Maria Rizzo takes offence at your overtures.

4 thoughts on “I am no revolutionary”