Every year I notice another hole in another jumper, a discreet hole, and not one caused by carelessness, snagged at a door or a grabbed by a greedy tree branch. 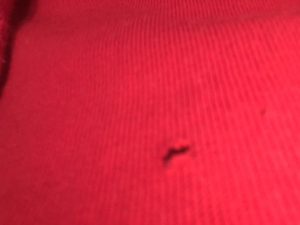 No, these moth holes are neat, as if someone has taken to the jumper with nail scissors and sliced out a tiny section from which the fibres begin to unravel.

This is the work of some other hidden creature who cannot abide my cupboard full of food but will only munch on the finest samples.

There has to be a metaphor in here somehow, but it eludes me, though even, as I say that, I think of my poor blog, attacked by spammers over these past several weeks.

My daughter’s tech-savvy boyfriend is helping me by getting inside the system  to establish what’s going on.

He tells me I have certain corrupt files.

I know not from where they came but once in place some unknown people – I assume they’re people and not robots – have used the space of my blog in which to conduct a scamming enterprise.

I have no idea how any of this happens or how it’s possible. But these gremlins come from France it seems, or so my daughter’s boyfriend tells me, and they use my blog as a means of sending out spam to others.

It makes me hesitant about keeping my blog going. Though I will not shut it down.

My daughter’s boyfriend has enlisted the help of his father, a technology specialist, who will download files to help us eradicate these unsafe files and get them out of my system, so these nefarious types can no longer use the safe appearance of my innocuous blog from which they can run their business of cheating on other people and stealing their money.

Presumably that’s the aim. To steal other people’s money without any of them knowing it’s happened until it’s too late.

It’s strange to be the front of house for such an activity, especially when I had no knowledge of its existence and it’s only the dutiful scouts from Google who picked it up and then warned everyone away from me.

Whenever anyone clicked on my blog, they were warned it was no longer safe.

I try not to take these things personally, but I find I cannot help but feel offended at the idea of being accused of being a danger unto others.

That’s what happens to writers. We write things and before you know it we’re  accused of all sorts of nefarious things that others glean from our writing.

At least this has happened to me.

Even as I write this, a thin wash of paranoia creeps over me as if my enemies might be reading and know  that I am onto them or they might object to me alerting the rest of the world to their existence; the thought police, the censors who tell me I must not write about such and such for fear of upsetting people who do not like my way of representing the world; these thought police who flutter inside my mind, like the moths in my wardrobe and chew holes into my most tender thin skinned confidence.