The poet, Robert Adamson, whom I follow on Facebook, has been writing of his experience in rescuing a small bird, whom he named Spinoza, and of helping this bird to heal, to grow and in time to fly.

One day soon, Adamson reports the bird will be big enough to join his other bird friends in the wild, and that will be a sad day for Adamson, who has come to love this bird.

Spinoza in turn has helped his rescuer to get over some health concerns, to get outside more, and in a sense to fly.

In his musings about Spinoza, Adamson quotes a line from Emily Dickinson, words that have not left me since I first read them.

‘Grief is that thing with feathers.’

These words conjure up the image of a bird in flight, a bird traveling to and from, a bird that abandons you.

I have long thought of grief as something that travels in waves, and to be sure, although I have had my share of misfortune, I have yet to suffer real grief, deep grief, the sort that doubles you over.

I have lost loved ones, watched a young niece die, and watched my mother and father die, though the deaths of my parents seemed timely.

I have suffered disappointments as well, but never the mind numbing grief that leaves a person diminished and changed forever.  Not that I am asking for such a load, but still I am curious about how it might be.

I suppose, as in all things, there are levels of grief and levels of loss. These I have known and I have sat with others through their own unbearable grief at the loss of loved ones, at miscarriages, at broken hearts.

It seems strange to be writing this, as if I am inviting it upon my head.

It reminds me of a notion I held as a child, that if you spoke out loud about something, you most likely made it happen. Therefore it was important to keep your dangerous thoughts to yourself, even from yourself, which was the hardest thing of all to do.

This morning in my sleep, punctuated by my need for a pee, I dreamed I used the oven as a toilet. Somehow I managed to ease my body into the cold oven, whose door was wide open and I peed onto its baking tray.  As I peed I realised how unsanitary this must be and decided to stop mid stream. Then I pulled out the baking tray and washed it down the sink.

A dream perhaps of putting things into the wrong place, and of realising my mistake before it is too late.

Have I done this of late, put things in the wrong place, and talked to people about things I should not have shared with them?

It’s not unheard of. My impulse, whenever I feel overwhelmed by some event, is to share it with another person whom I trust will understand.

Recently, I talked to a writing friend about my experience of a writing workshop several weeks ago. It’s a long story but one in which a large group of women sat around in a circle to discuss their experience as writers.

At one point during this workshop, after I had raised the issue of my four times edited manuscript to the person running the group and talked about my difficulties of getting said manuscript published, her response was one of, ‘Sometimes you need to know when it’s time to let things go.’

Somehow these words derailed me. They hit a raw nerve, of grief, perhaps.

I had hoped she would say something like, ‘Stick with it. Rejections happen often. You just need to persevere.’

I’m good at persevering, not so good at giving up.

Anyhow, after the lunch break where I chose to sit alone nursing my wounds because I could not see how else I could deal with them, the discussion continued around the idea of the importance of not chasing publishers all the time, of knowing when a project should be abandoned, of knowing when to give up and of starting something new.

And as the woman who ran the group spoke these words, as I sat in my place at the tables, which they had set up to form a horse shoe of sorts, tears rolled down my cheeks.

No one in the group said anything about my tears and I have no idea whether anyone from this large group of women noticed them but no one alluded to my distress and the speakers spoke on, and I wrote down their words as a way of holding myself together.

Whether it was in my imagination or whether it was a fact for the entire group, I sensed the energy in the room drop. It was as if everyone in the room began to feel some wash of grief as well, as the leader continued to talk about the importance of knowing when enough is enough.

I made it through to the afternoon tea break and escaped to the toilets outside where I could let myself howl.

I howled it out, whatever it was. My disappointment in this woman’s words. The way I heard her telling me to stop this project of mine and move onto another.

I managed to get out a last sob, wash my face, dry my tears, pull myself back in place and go back for the final session before the end of the workshop.

During the last short writing exercise in which the organisers wanted us to write out our plans for the next year, I found myself writing down words to the effect: ‘Fuck you. I’ll show you. I’ll get this book published.’

Ten minutes before we were due to finish, the organiser asked each of us in turn to outline in a few words what we would take away with us from the workshop. People spoke with optimism and determination about the year ahead and of what they would do to improve their writing practice.

I was second last to speak. I, who had come to feel like the great naysayer of the group.

I told the group then, in polite form, that I had found it difficult this idea that I might give up on my manuscript. I told them how instead of writing down plans for the year ahead, I had written down the words: ‘I’ll show you. I’ll get this manuscript published’.

The leader seemed pleased with that response. ‘Good on you. Go for it,’ she said

And everyone else seemed happy after that, but not me.

It’s not grief really. It’s more a heavy sadness that weighs me down still some weeks after the event.

In time I expect it too shall pass.

I told my writing friend this story yesterday and maybe some part of me believes I should not tell it to anyone ever, as if the very telling of it will make it all come true and jinx my manuscript, like peeing in the wrong place. 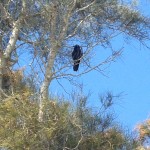 This is the bird who sat in the tree under which her family scattered my niece’s ashes.  The bird arrived at the beginning of the service and did not leave until we were done.  That thing with feathers.