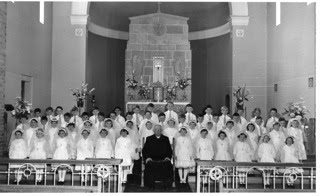 My mother takes Nulax for her bowels. She keeps the Nulax on top of her fridge. A rectangular lump of compacted dried fruit that tastes like jam but is barely chewable.

‘I cannot think you need to take it,’ my mother says to me.
‘You are young. Your bowels are good. But mine, mine are stuck.’

Years later a kinesiologist looks into my eyes. His bright light beams and blinds me. ‘You have an excellent immune system,’ he says, ‘ but your bowels are sluggish.’

My mother again, I think. She always manages to get in somehow, inside my system. She slows me down.

How can I purge myself of this woman of the slow bowels and the turgid constitution?

There was a time when I was about fourteen when I decided to join the ranks of all those women who sat around at morning tea and talked about what went into their bodies and what they might do about getting it out.

My grandmother died of cancer, not of the bowel, as you might imagine, but of the stomach. Something got inside her, too, something she could never be rid of.

All the Nulax in the world could not relieve her of her guilt.

Guilt sat in her gut like a dead fish. It stank out her insides and eventually ate away at them until she died.

At seven I was formally introduced to the concept of guilt when I made my first Holy Communion.

And then when I was fourteen I, too, decided I needed to do something with it.

Each day I chewed a wad from the Nulax pack. The fig seeds stuck between my teeth. The apricot pith coated my tongue.

I chewed to moisten, but to swallow the stuff was like swallowing a cow.

I could not get rid of my guilt.